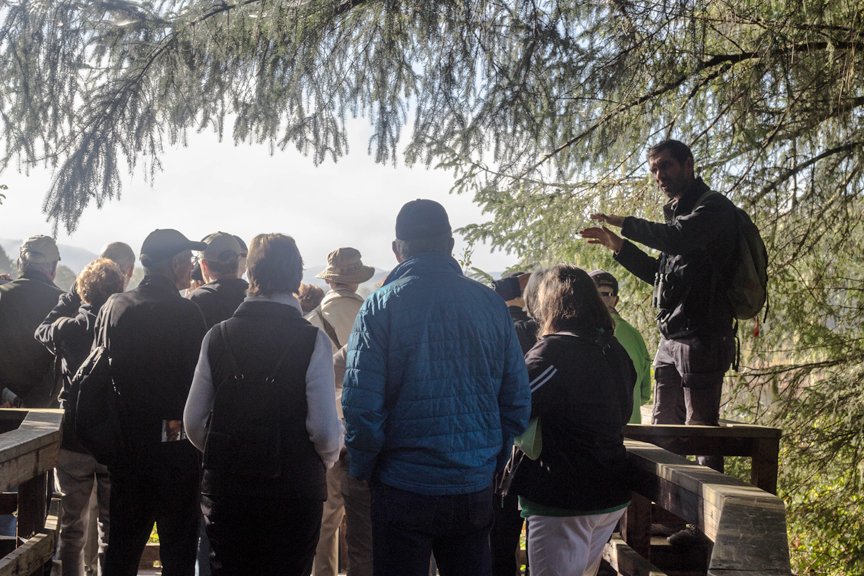 We spent this first day in and around the quaint coastal town of Astoria, Oregon. Although this area is notorious for its copious rain and thick fog, we were lucky to enjoy a day full of sunshine and warmth. After a hearty breakfast, we boarded our coaches and headed south to Fort Clatsop National Historic Park. A dense temperate rainforest surrounds the park. This setting made it easier to imagine how the members of the Lewis and Clark Expedition lived at this site during the winter of 1805 to 1806. The life-sized replica of the fort itself completed the effect. We examined the fort and then some of us wandered through the excellent museum, while others went on a nature walk to learn about the native plants and animals of the coastal forest.

Next, we stopped at the Astoria Column, a 125-foot monument to the region’s storied history. The tower sits atop a high point that gave us a spectacular 360-degree view of the Columbia River, Astoria, and the Coast Range. We then visited the Columbia River Maritime Museum, where we learned about the perilous mouth of the river, known as Columbia River Bar, or the Graveyard of the Pacific. Lunch was served back on board the National Geographic Sea Lion.

After a delicious meal, most of us rode in our coaches across the lofty Astoria-Megler Bridge to Washington State. Our destination was Cape Disappointment. Thankfully, this rocky, forested point of land failed to live up to its name. The Interpretive Center was another great museum focused on Lewis and Clark’s expedition. Outside, the sun was shining bright over the Pacific Ocean. From our vantage point on top of a high cliff, we could see several humpback whales feeding in the waters of the Columbia River Bar.

Those who didn’t take the ride to Cape Disappointment either went on an expedition landing craft cruise around the islands of Lewis and Clark National Wildlife Refuge or paddled kayaks in the same area. Once everyone was back on board the National Geographic Sea Lion, we set sail and started our journey upriver.